skip to main | skip to sidebar

No, we're not departing our beloved coop, we are moving Henbogle blog to WordPress. You can find the new and possibly improved blog here: http://henbogle.wordpress.com. Please come and find us!
Posted by Ali at 7:53 AM No comments: 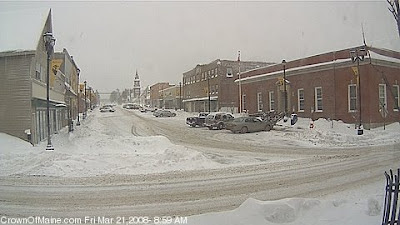 Caribou, Maine celebrated the first day of spring by setting a new snowfall record overnight during a strong winter snowstorm. The National Weather Service reported the snowfall total at 183 inches as of last night with more snow and a blizzard warning today. For the divisionally challenged, 183 inches is 15+ feet of snow. The previous record of of 181.2 inches of snow was set in 1955.

As if this wasn't enough, yesterday Caribou set a record for the amount of snow received in one day, 10.6 inches. This breaks the previous record of 9.5 inches set in 1971.

I used a photo from the live webcam at the Crown of Maine website. Click for updated photos of downtown Caribou. More webcam images of the Aroostook area are available through the weather site Wunderground.

While I enjoyed the few years I lived in Aroostook County, I don't miss those winters at all --I'm happy with my zone 5 climate, thank-you. On the map, you'll see Caribou in very far northern Maine. I used to live in Presque Isle, just a few miles south of Caribou. I now live about a 4 1/2 hour drive south of there, not too far from Brunswick.
Posted by Ali at 8:32 AM 2 comments: 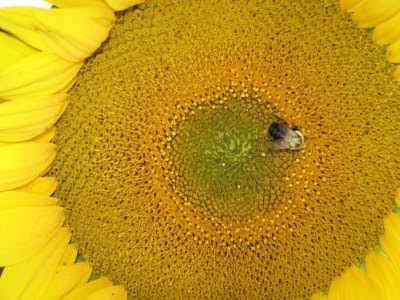 I know it is very wintry outside today in Maine (snow sleet & freezing rain, anyone?) but the astronomical facts are clear: It is the first day of Spring! Congratulations all 'round for surviving another winter.

The bare muddy spots of yard, the muddy driveway edges, the muddy dog, the muddy chickens, all point to one thing -- Spring. I've even felt my unusually dormant gardening urge stirring to life of late -- soon, I'll have my vegetable planting list complete, and then the garden plan, and by next weekend, the seed starting cart will be set up in the laundry room (I hope.)

Enjoy the longer days, lengthening know until June, when the cycle reverses itself. I know I'll be spending as much time outside as I am able too.
Posted by Ali at 7:33 AM 1 comment: 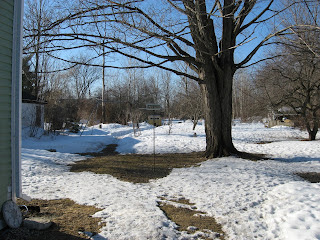 There are ever-increasing patches of bare ground in the backyard, mostly near the sugar maple and flowering crab trees, and along the path to Henbogle coop. The snow is still thigh deep in other areas, alas. 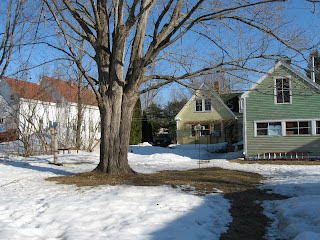 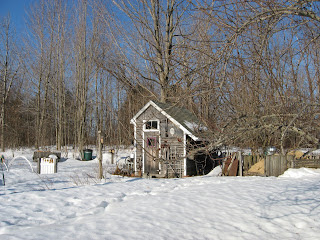 The garden shed, surrounded by thigh-deep snow. Note the white garden gate to the left. 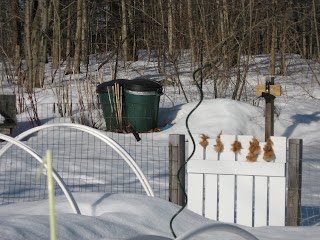 Dog hair from Fisher, stuffed into the gate to be available to birds for nest-building. We cleaned out the nest boxes on Sunday, and were scolded by a cheeky tufted titmouse, probably one of the 2 broods last year to be hatched in that nest box. We decided to make good by bringing out some Fisher fur saved from his last lion-look grooming. 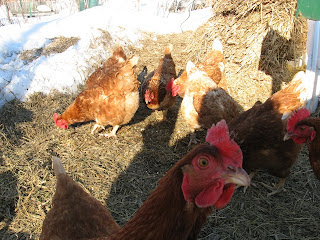 Pippi, looking suspiciously at the camera. Is that a treat? Home sick from work with Dan's bug today, I looked out the window this morning to see Pippi out of the hen-pen, perched on the snow. On went my new boots, and I was off to catch a chicken. Fortunately, Pippi recognized the bowl in my hand as a treat container, and hop-flapped her way over to me. Back into the pen she went to share the leftover pasta with the other chooks.
Posted by Ali at 12:36 PM 1 comment:

Although it was a dreary gray day today, I saw sure signs of spring. 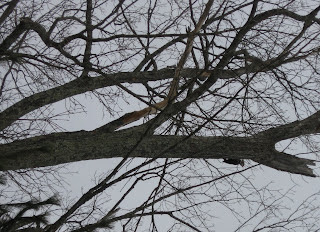 A pileated woodpecker busily working on the dead tree next door. (click photo to enlarge)

Tulips peeking up in the foundation bed behind the 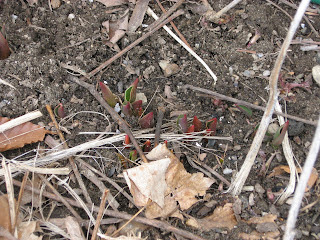 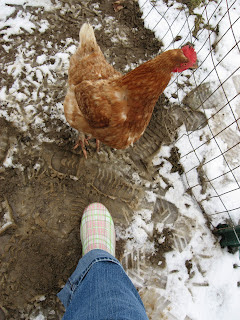 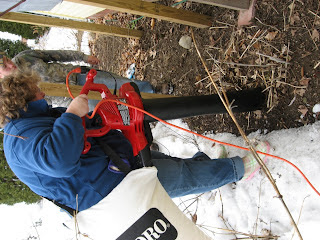 My birthday present in action. This will be the ONLY vacuum cleaner I will ever request as a gift. It sucks up the leaves, and chops them up, ready to compost. This will be perfect in the perennial gardens, where the leaves get caught in the shrubs.

Even green fuel can be a killer

I wish I could say I was surprised, but no, I'm not. It turns out the green fuel, or bio fuel, revolution taking place here in this country isn't so green after all. As usual, it all comes down to greed. It is cheaper to dump bio fuel by-products than to dispose of them safely. The New York Times reported earlier this week on the illegal dumping of fuel production by products, including a tanker dumping glycerin in Missouri.

an anonymous caller reported [to the Missouri Department of Natural Resources] that a tanker truck was dumping milky white goop into Belle Fountain Ditch, one of the many man-made channels that drain Missouri’s Bootheel region. That substance turned out to be glycerin from a bio-diesel plant.

In January, a grand jury indicted a Missouri businessman in the discharge, which killed at least 25,000 fish and wiped out the population of fat pocketbook mussels, an endangered species.

Apparently Times Beach has receded from the memory of this Missourian, or more likely, he's the moral equivalent of W.

When I bought my car (Pontiac Vibe) in 2003, I researched extensively trying to find the best combination of fuel economy, safety, reliability and model that would meet our needs. I really debated about purchasing a diesel VW Jetta Wagon, hoping to run bio-fuel in it, but decided against it. My car at the time, a VW Golf, was only slightly more reliable than a Yugo, which did not inspire hope for reliability in the Jetta, and bio-fuel was still scarce in Maine at the time. Reading this story, I'm glad I opted for the Vibe, which gets good mileage, especially once I remove the snow tires, (35+mpg hgwy) and is utterly and completely reliable.

As for the polluters, time to make toxics dumping subject to the death penalty, and increase the fines and criminal penalties for businesses guilty of dumping, such that the business and its trustees are bankrupted. (Since my first choice is a firing squad, this seems like a compromise.)
Posted by Ali at 9:08 AM No comments: 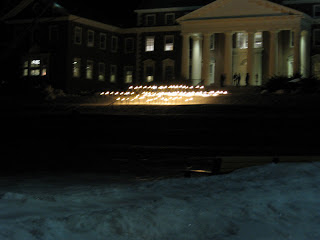 Finally, Saturday arrived after a hideously over-busy week at work. Tuesday included a lecture on atmospheric chemistry followed by a lighting demonstration. The display used an array of 100 100 watt bulbs to visually depict global energy use. Most nations use the equivalent of 40 bulbs (4,000 watts) per person; 20 bulbs – (2,000 watts) is the current world average energy use; the poorest nations, such as Eritrea, Haiti, Myanmar, Congo use 5 bulbs per person (500 watts or less). The US uses 100 bulbs per person (10,000 watts). It was interesting, and theoretically would have been visible to outer space but for heavy cloud cover. 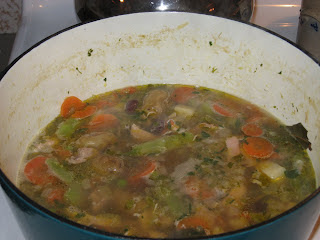 Dan has had the flu, so I made some chicken soup Wednesday. Loaded with veggies, it hit the spot, and provided enough leftovers for him to have something nutritious to eat for the rest of the week while I was super busy at work. 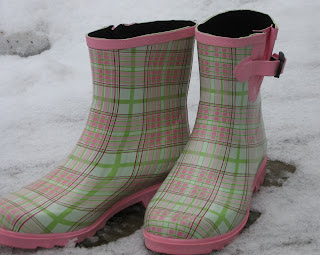 Friday I collapsed after my big event, but today we went shopping at Maine Department store Reny's where I picked up an antidote to mud season --pink and green plaid boots. I am sure the chickens will be impressed; I think I'll go and show the girls the new boots now.
Posted by Ali at 2:29 PM No comments: 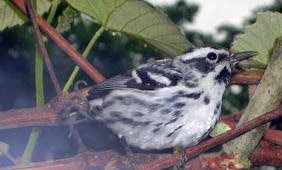 Maine's Biodiversity Research Institute released results of a study yesterday which found over 190 chemical contaminants present in 23 species of birds studied across the state.

“This is the most extensive study of its kind to date and the first time industrial stain and water repellants were discovered in Maine birds,” says report author senior research biologist Wing Goodale.

Although there was some good news, in that the presence of banned chemicals like PCBs and DDT, are lower, overall this is sad news for Maine wildlife and Maine people.
Posted by Ali at 11:53 AM No comments:

E is for Excellent Award

from my companion in excellence, Laura of Urban Hennery